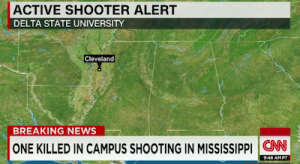 Mississippi –  A male professor was shot and killed at Mississippi’s Delta State University Monday, according to Bolivar County Deputy Coroner Murray Roark. The victim was in his office at the time of the shooting, Roark said, adding that the shooter remains at large.

Delta State, which is in Cleveland, Mississippi, had earlier tweeted on its official account that the campus was on lockdown and advised that everyone stay indoors and away from windows. Earlier the school had sent a tweet saying a lockdown was ordered:

Delta State University has confirmed one fatality. Campus remains under lockdown. Please stay inside and away from windows.

Campus remains under lockdown. More information will be distributed as available.

Citing local reports, the Clarion ledger newspaper reported that an amulets took one person from the campus. Additional details were not immediately available.