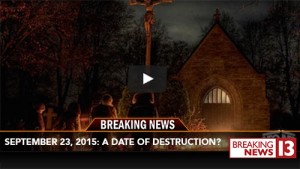 Roughly 3 months, or 500 days from when the French Foreign Minister Laurent Fabius and John Kerry made a vague announcement, it will be September 23, 2015. The occult beliefs of the illuminati stress the importance of the dates following the Autumn Equinox. The occultists believe that a veil separating the earthly realm from the demonic realm reaches its most allowable for the transfer of demons until midnight on Halloween. The events leading up to, on and nearly following the date of September 23, 2015 are numerous and many of them are as yet unconfirmed claims.

An asteroid is said to be approaching Earth that will hit the coast of Venezuela and Brazil and create an extinction level event. The update and ramping up of the Cern large Hadron Collider and the possible universe destroying opening of other dimensions within our own dimension or access to a gate that has been closed. The culmination of Jade Helm, a large-scale psyop operation targeting pockets of the United States with the largest density populations of patriot data to be utilized by military intelligence; and Canada’s Maple Resolve Operations, a large-scale readiness exercise movement of military vehicles.

Meanwhile, the closing of large retail chains beginning in August and resolving around early September due to the success of online retail in dwindling median income.  Also there have been claims from eyewitnesses in Canada reporting Target stores being converted into underground military bases.  Again, we are simply evaluating the signs here, you have to look at them yourself and come up with your own opinion. You can watch the Info Wars news segment in the video below.

Here’s Another WARNING of Astroid Impact On September 23, 2015