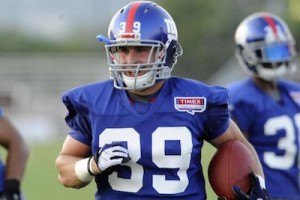 Former Iowa Hawkeyes star safety Tyler Sash, who went on to play two NFL seasons with the New York Giants, died Tuesday at the age of 27. The Des Moines’s register confirm the news after Scott Reister of KCCI.com reported the Oskaloosa, Iowa, native was found dead by a family member. The cause of death is yet to be determined. Sash was one of the greatest defensive backs in Iowa history, as he reeled in 13 interceptions and racked up 217 tackles in just three collegiate seasons.

His NFL career was short-lived after the G-Men selected him in the sixth round of the 2011 draft, but it was certainly eventful, as he won Super Bowl XLVI as a reserve. the Giants released a statement on Sash’s death, via Paul Swarts of the New York Post: “We were all deeply saddened today to hear of the passing of Tyler. Our thoughts and prayers go out to Tyler’s family and friends and all the Hawkeyes he was so proud to represent.”

After the news of Sash’s death went public, there was a great deal of reaction on Twitter from athletes he knew him, especially those who are part of the Hawkeye family. Sash was a beloved figure in the realm of Iowa football, and the team is likely to play with a heavy heart when it clashes with the rival Cyclones on Saturday. Although Sash gone, he certainly won’t be forgotten by the Hawkeyes football fans who watched him make so many huge plays for their team during his tenure.